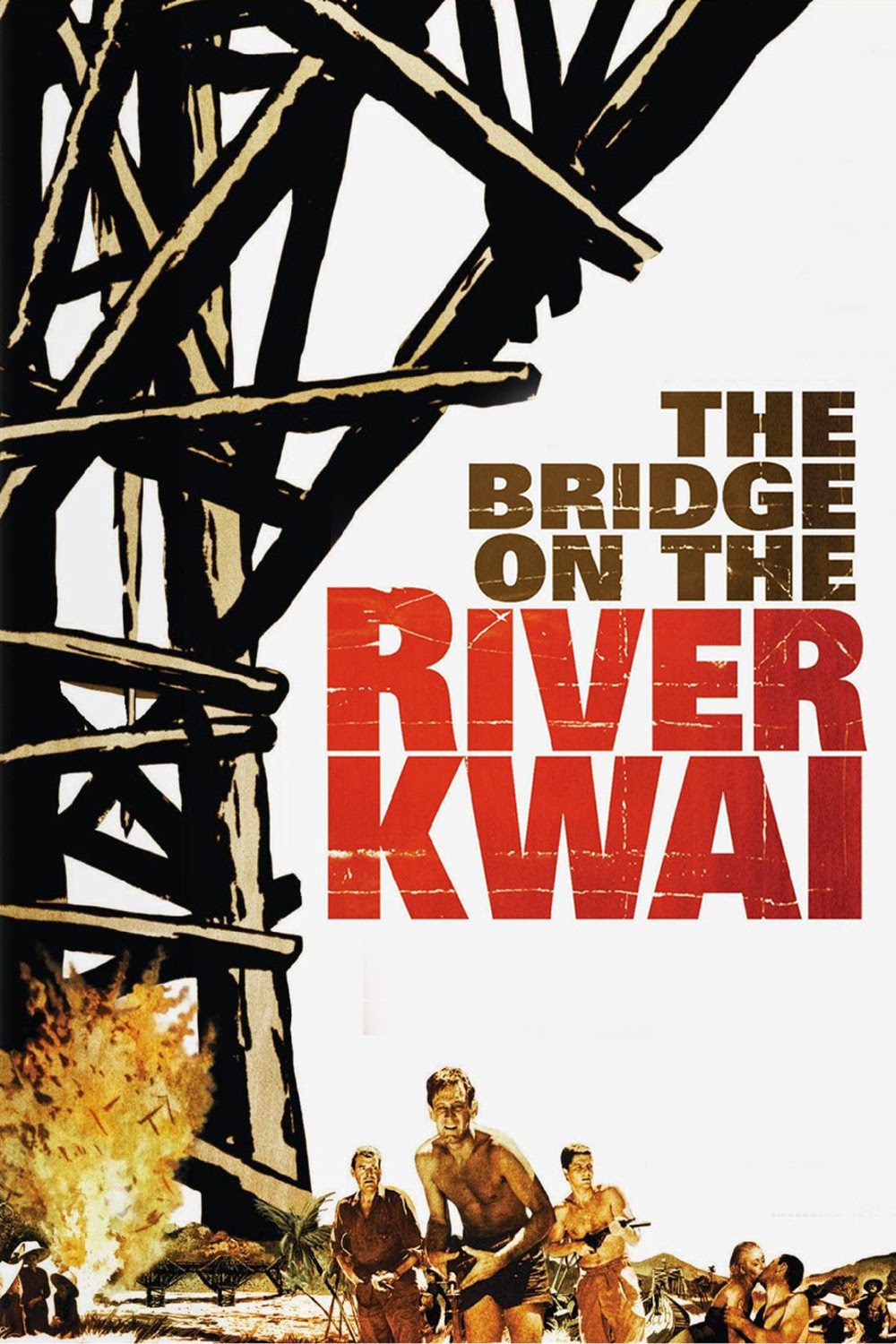 I’m just going to say it straight up: The Bridge on the River Kwai kicks ass. I know that may sound like a completely vulgar, uneducated snap review to bestow upon such a great film. But if that is wrong then I don’t want to be right, old sport. Prior to this, I had never seen The Bridge on the River Kwai, nor did I really know anything about the story. The only things I knew were that Obi-Wan Kenobi was in the film; and that the scene in The Parent Trap when all of the girl campers are marching and whistling in unison pays homage to when the British POWs march in the film. So needless to say it was a complete revelation to watch the actual plot unfold because I truly had no idea that this film was going to put me in a headlock of awesomeness for a couple of hours. I can’t remember the last time I was completely enveloped in a film to the degree I was while watching The Bridge on the River Kwai. Nor can I recall the tension created by a film to be so compelling that I involuntarily spent the entire last scene shouting at the characters to do this or that. It still frustrates even now to think about how it all went down. But I suppose the hallmark of a great film is one that charges you up and occupies your mind days after the closing credits have tripped along the screen. So bravo Bridge, bravo.

The Bridge on the River Kwai was engineered by the great David Lean, who evidently had a penchant for maneuvering epic films to cinematic prestige, going on to direct Lawrence of Arabia and Doctor Zhivago, both of which garnered multiple Oscars. In addition to Lean’s architectural prowess behind the camera, The Bridge on the River Kwai boasted a brigade of talent in front of the camera, including Alec Guinness, Jack Hawkins, William Holden and Sessue Hayakawa. The film gleaned a solid eight nominations from the Academy’s voting members, spinning seven victories from those nominations, including Best Picture for 1957. The lone nomination that did not transition into a victory was in the category of Best Supporting Actor for Hayakawa. In terms of Oscar trivia, Hayakawa’s nomination attracts significance, as he became the first male actor from the continent of Asia and the first Japanese actor to be nominated in this category. Another interesting fragment of Oscar information in the film’s bulletin concerns its victory in the category of Best Adapted Screenplay. Due to their connections with the Communist Party, the film’s original screenwriters Carl Foreman and Michael Wilson were placed on Hollywood’s blacklist in the wake of the Red Scare, forcing them to work on the film clandestinely. The resulting Oscar victory for their efforts went to Pierre Boulle, who wrote the French novel of the same name upon which the film was based. However, the situation was given a happy Hollywood ending in 1984 when the Academy retroactively awarded both Foreman and Wilson Oscars for penning the film’s thrilling screenplay.

Set toward the latter end of WWII, The Bridge on the River Kwai chronicles the activity inside a Japanese prison camp located in western Burma. The film opens as a new company of British soldiers are deposited into the camp as prisoners to work on constructing a railway bridge over the nearby river Kwai. The camp is lorded over by the strict and implacable Colonel Saito, who immediately clashes with the company’s immovable senior British Officer, Lt. Colonel Nicholson. Saito commands the company’s officers to join their men in erecting the bridge. However, Nicholson refuses, citing the Geneva Conventions, which exempt military officers from forced manual labor. As punishment for his uncompromising stance, Saito has Nicholson thrown into “The Oven,” an enclosed iron box, without food or water. This move sets up a battle of wills between Saito and Nicholson, with the former continually tightening his grip to break the latter’s spirit. However, without Nicholson’s leadership, production from his men grows feeble, gradually setting construction on the bridge back several weeks, which alarms Saito, as his neck is on the line if he fails to complete the project under deadline. Able to see the writing on the wall, Saito concedes victory to Nicholson, allowing him to command his men as he sees fit in order to get the bridge back on schedule.

Meanwhile, U.S. Navy Lt. Commander Shears, a prisoner in the camp, makes a miraculous escape out from under Saito’s heel, eventually finding his way into a military hospital. While enjoying recovery, British Major Warden enlists the help of Shears to lead an expedition back to the camp in order to destroy the bridge before it is put into use. Initially, Shears refuses to volunteer; appalled by the thought of slugging it through the steaming jungle he just barely managed to escape. However, it comes out that while in the camp Shears impersonated a higher ranking naval officer in order to curry better treatment from the Japanese. Faced with the dilemma of being charged for impersonating an officer or slashing his way back to the POW camp, Shears opts for the latter, setting up one of the most intense scenarios in cinematic history.

A great film can never lay claim to such a title for one singular reason or another. To say otherwise is like arguing that a symphony was spectacular only because of the strings section. To be great, all of the main elements of film need to be in concert in order to produce something extraordinary and The Bridge on the River Kwai receives no concession on this truth. I don’t think a great film has to be called perfect in order to be great because flawlessness is damn near impossible, old sport. But The Bridge on the River Kwai comes fairly close to avoiding any fault, which I think owes largely to the tight and disciplined script that clearly maps the way forward, allowing for every other element of the film to stay firmly on course. I can’t recall seeing a film in recent memory that felt so patient and controlled in constructing its rising action.

Essentially, the script unfolds like a three act play, with the first two acts developing the two main characters’ destinies, which sets up an epic collision in the final act. The reason the payoff is so disco is that the film doesn’t rush itself to get to the finale, which makes it beyond intense and aggravating to sit through. By the end of the first act, the audience comes away feeling intimately acquainted with the POW camp and all of the struggles that have taken place, from the colossal battle of wills between Saito and Nicholson, to the arduous task of engineering a world class railway bridge. This knowledge of the situation leads the audience to root for Nicholson and his men because of the torture and brutality they have surmounted to produce a resounding structure that stands as a monument to their strength of character.
But by the end of the second act, the audience is also highly sympathetic towards Shears and the hardship endured in the course of making his daring escape from the POW camp. This guy is a survivor and has skillfully played the game in order to secure his freedom from the Japanese, even if his tactics haven’t been exactly ethical. But when he is cornered into acquiescing to be part of the dangerous mission to blow up the bridge, there is a high level of pity bestowed on him, which produces a reaction to cheer for him in his quest. Unbeknownst to either Shears or Nicholson, their two trajectories, populated with so many complexities, are set on a collision course that is so tormenting to watch while wondering just what is going to go down at Kwai. It’s a unique feature to basically pit two heroes against one another, which elevates the agonizing nature of the finale.  And while it’s a lengthy trip in getting there, the film completely justifies every single second of its 161 minute running time. 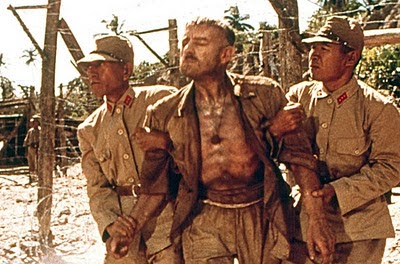 Apart from the brilliant script, another reason the film is such an intense journey to watch is that it delivers
some knockout performances that boast the final product, particularly the turns from Alec Guinness and Sessue Hayakawa. The former is aces at embodying Nicholson’s uncompromising nature and allegiance to protocol, even as Saito turns the proverbial screws to break his spirit. The scene where Nicholson stumbles like a marionette from “The Oven” to Saito’s quarters for negotiations emits a sense that Guinness isn’t acting. He genuinely seems like a man on the verge of collapsing. Apparently, Guinness referred to his staggering walk the finest work he had ever done.

Hayakawa delivers a fascinating performance of an ironclad individual whose pride is toppled by a more formidable opponent. He travels Saito’s trajectory in memorable fashion, starting out as an intimidating disciplinarian, and ending up as a somewhat crumbled version of his military persona. In some ways, Saito is the most interesting character in the film because he isn’t a one-note villain who chews up each scene with threats and a heavy fist. Saito’s actions are driven by a completely different set of pressures and fears, which creates a degree of understanding and sympathy, forming that rare antagonist who is given to express vulnerability onscreen. In lesser hands, the part would not have been realized with as much credibility as Hayakawa infused into the role. 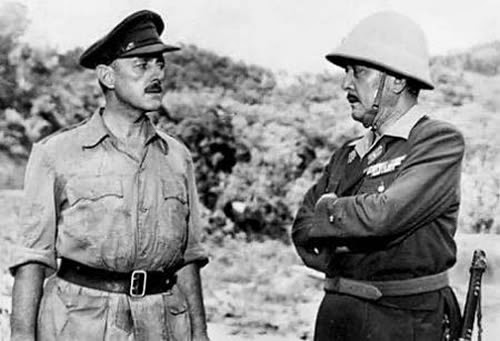 Prior to The Bridge on the River Kwai, the only film I could identify with Hayakawa is The Swiss Family Robinson, where he plays a grimy pirate captain. But, as it turns out, in the dawn of his career, Hayakawa was a major American film star, particularly in the silent era, where he was noted for his matinee-idol good looks. Apparently, at the height of his career he was as well-known as Charlie Chaplin and Buster Keaton. However, over time, his legacy and career faded from the mainstream cinematic consciousness and into the wings of memory. In a way, it almost seems fitting that you don’t hear much of Hayakawa these days because you don’t hear much about The Bridge on the River Kwai anymore either. But the latter is a damn fine piece of cinematic entertainment, old sport, and the former is large reason for that fact.

Favorite Line: In response to Colonel Nicholson’s response about adhering to the Geneva Conventions, Colonel Saito snaps, “Don’t speak to me of rules. This is war! Not a game of cricket!” I thought this was a great line because as Nicholson was academically reciting the Geneva Conventions to this small-time dictator, I thought what a waste of breath. Why would Saito care about some stupid rules out there in the middle of the jungle? Apparently, he didn’t, and I like it when a script has its characters demonstrate logic within the world they inhabit.
Posted by Unknown at 5:14 AM