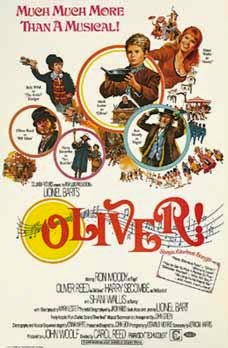 There’s a certain peculiarity to musicals, or rather in the types of stories that undergo the conversion into a song and dance affair. In some instances, the inclusion of music makes sense. Fanny Brice became a celebrated performer on stage, establishing a natural connection to the fact that Funny Girl should be told largely through the use of music and theater. Roxie Hart dreams of being a jazz baby on the cool stage, making the musical numbers in Chicago a sensible pairing. This brings us to Oliver! (As if to make it more emphatic, the title comes garnished with an exclamation point, but like all garnishes, it just feels in the way and so I am going to set it aside for the remainder of this entry and simply refer to it as Oliver.) To me, it seems a creatively odd notion to read Charles Dickens’ bleak, mangy novel and pepper it with musical numbers. Of course, I’m no music man, nor do I scarcely read literature whilst imagining a soundtrack in my mind, especially not for a story like Oliver Twist. Unfortunately, the annexation of music into the story slightly candy-coats the film, which I think scales down some of the societal criticism and darker themes laced into Dickens’ original text. But on the whole, as a piece of energetic entertainment, Oliver works splendidly well.

Directed by the notable Sir Carol Reed (yes, he’s a dude named Carol), whose time in the director’s chair yielded other regarded films such as Odd Man Out and the noir classic The Third Man. The gang of actors toplining Oliver has sadly become a short list of names that have long since faded in the rearview mirror of the general consciousness; actors like Mark Lester, Shani Wallis, Ron Moody, Jack Wild and Oliver Reed, who, incidentally, is the director’s nephew (Is there a little nepotiz going on here?). Oliver nabbed an impressive double-digit haul of nominations with 11, pick-pocketing five statuettes, including Best Picture for 1968. It also picked up and additional, honorary Oscar for its achievements in the art of choreography. In terms of Oscar trivia, Oliver became the first, and last, G-rated film to take home the Academy’s top prize, which is a sort of a default claim to fame because none of the previous winners had received an MPAA rating at the time of their Oscar victory. It also marked the last time a musical would wind its fingers around a Best Picture Oscar, until Chicago ended the drought 34 years later.

Out of the gates, I have to admit that it’s difficult watching Oliver without comparing it to the novel. But in further considering this reaction, it doesn’t seem fair to tie up Oliver with this chord of judgment. It would be like admiring an individual, but later finding immediate disappointment with that individual’s identical twin because, although they look similar and share the same genealogy, they are ultimately two separate individuals. There is some part of human nature that wants a film to be just like its source material, but even though the two products are alike in many ways, at the end of the day they are different and should be judged on their own merits. It’s difficult to see the distinction at times, an inability which I think seeps, in a modicum, into my reaction to the film. However, in the film’s opening credit, it says the film is freely adapted from Charles Dickens’ Oliver Twist, which I appreciate as an acknowledgment that the filmmakers didn’t set out to make a cinematic replica of what Dickens had created.

On that note, I’ll start with perhaps the film’s overarching strength: its impeccable casting, which is no small accomplishment in a film with a large cast of children. The number of films with major child characters that don’t annoy the hell out of me is few and far between (every Jurassic Park film ever made, I’m looking your direction), so I have to give a tip of the (top) hat to casting director Jenia Reissar, for pulling off the difficult task of casting a reported 84 boys. Extra kudos should be given to Reissar for envisioning Jack Wild in the role of the Artful Dodger. It’s such an iconic literary character, tagging it with an enormous amount of pressure to pull it off. But Wild darts up and down the streets of London with such aplomb and ownership that he seemingly redefines the iconography of the Artful Dodger and pick pockets the novel to make the character completely his own. In my mind, it’s impossible to read Oliver Twist and not picture Wild’s be-smudged face and blue waist coat in my mind when reading the scenes with the Artful Dodger. 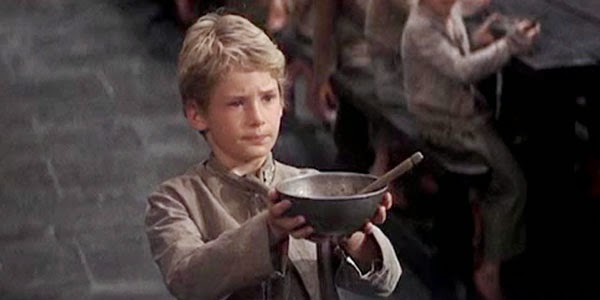 However, while Reissar should be commended for her keen eye in singling out Jack Wild for the role of the Artful Dodger, she should also be administered a light slap on the wrist for casting Mark Lester in the titular role. In all fairness, it’s not that he turns in an abysmal performance. It’s more that he’s so overshadowed by everyone else that gets completely lost in the shuffle, which made the character boring. It’s simply bad form to have your lead character be a snoozer. It’s even worse form to have the lead character feel so insignificant that you find yourself rooting against him. Quite frankly, I wanted Mr. Bumble to dunk him in the cauldron of gruel. In the end, insofar as Oliver was concerned, I found nothing memorable or endearing about him. Actually that’s not true; his singing voice is ridiculous. Apparently, they dubbed him over with the singing voice of a young girl, which makes Oliver even less likable because he sounds like anyone could kick his ass. Maybe all of this isn’t Lester’s fault, particularly because I think child actors tend to do as their told by the director, as opposed to acting on instinct. But still, I can’t let Lester off that easily because ultimately it’s his mug up there singing and dancing and he’s had a free ride long enough. It’s time someone called it like it is.

The grand tradition of literary villains being infinitely more interesting than their heroic counterparts held firm in Oliver, being rounded out with tremendous performances by Ron Moody as the greasy, skinny Fagin and Oliver Reed as the imposing Bill Sikes (which I’ve always been convinced was a riff on the word psycho). Moody, who was apparently only 30 years old in the film, gives a louche style to his rendition of Fagin. Even though he oils his way through every scene with a yellowed grin, he manages to be charming to the point where you find yourself rooting for him. My heart still kind of aches for Fagin when he drops his box of treasures in the mud, hopelessly grasping about in the murky depths for his boosted items. I always found it appropriate that he is seemingly roasting cocktail weenies of the fire because in a way Fagin is a little weenie, but a charismatic one, nonetheless.

If Fagin’s weasel persona is lacking any intimidating qualities, it’s more than likely due to the fact that Bill Sikes has cornered the market and amassed a monopoly of brutish character in the streets of London. It’s no understatement to say that Oliver Reed casts a shadow over the entire narrative. His presence is felt even when he’s not present, which is remarkable because he doesn’t actually have a lot of dialogue. Reed strikes all the right notes in being a mean son of a bitch that could crush your throat at any unforeseen moment. He has an imposing stature, subtle glare and demanding tension in his mouth, disinviting all humanity from attempting to approach him. What’s remarkable about Reed’s performance is that he achieves all of this without straying off into caricature territory. He balances all of the elements that makes Sikes who he is, motivated as he is, that his credibility as a villain is never jailed on suspicion of fraud. I have no doubt Reed would have a received an Oscar nomination for Best Supporting Actor, had his fellow cast mate Jack Wild not dodged into the category ahead of him.

Apart from the strong cast of players, the art and set direction of Oliver impeccably realizes Dickens’ world in all of its grimy glory. The workhouse is a wonderfully constructed canvas of drab and dreck colors. When all of the orphans come marching in to the solitary “dining” hall like prisoners, the monotone palate of grays paradoxically creates a splendid visual of living, breathing hopelessness. In equal measure, Fagin’s hideout is a wonderful apparatus of rot, teetering over a pool of feculent waste, the likes of which would most assuredly be condemned by the EPA. The repulsive nature of Fagin’s hide out is effective in keeping the music from completely turning the film into a cheery roadshow. London is as much a character in this story as any of the actors, and the sets create a cityscape devoid of soap and solace, waiting to just rip you off and leave you twisting in the gutter. The grimy backdrops hold down a reminder to the audience that this shit is real; that the world is a thorny place; and life aint no picnic for these exploited kids. 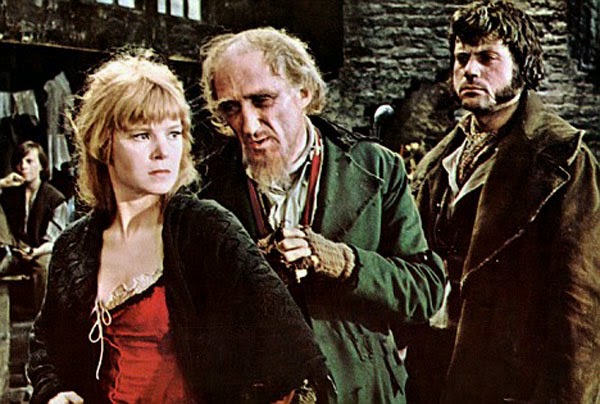 In the end, I think why I like the story of Oliver Twist, is its illustration of how the good and evil in the world struggle to influence the young souls in order to corrupt or solidify their character by setting them on a particular course. The film does a fine job in capturing this conflict portrayed in the book, which is at the core of the narrative. The sense of two sides waging battle for Oliver himself is a contest that is keenly felt, thanks in part to great gallery of rogues. There are so many interesting examples of characters in the film that show the complexities that societal influences exert in molding people into their respective natures, which contribute to one side or the other in this grand war. Nancy is clearly an individual with a functioning moral compass, but is forced into a life of thievery in order to survive. But her regrets at not having the opportunity to choose a different path; to end up a different person drive her to put everything on the line in order to save Oliver from the same fate. By wading into this battle, she pays the ultimate price, indicating the monstrous nature of the world in demanding the loyalty of its servants. Even Fagin vacillates back and forth in “reviewing the situation” of his life, contemplating whether he should get married, settle down, change. But in the end, he finds his nature so reified that he is unable to turn back around and start over again, and so scuttles off into the sunset to continue his five-finger discounted ways. Through these characters, Dickens holds a mirror up to show the terrible effects society has on a large population of its members. This idea is most certainly not lost in translation, even though the tune of its presentation comes with some alterations.

Favorite Line: Oliver’s benefactor Mr. Brownlow summons Mr. Bumble to his home to discuss the boy’s parentage. Upon finding out that Mrs. Bumble had been harboring evidence as to the Oliver’s family, Mr. Brownlow scolds the pair of them in a particularly amusing exchange.

Posted by Unknown at 6:29 PM No comments: