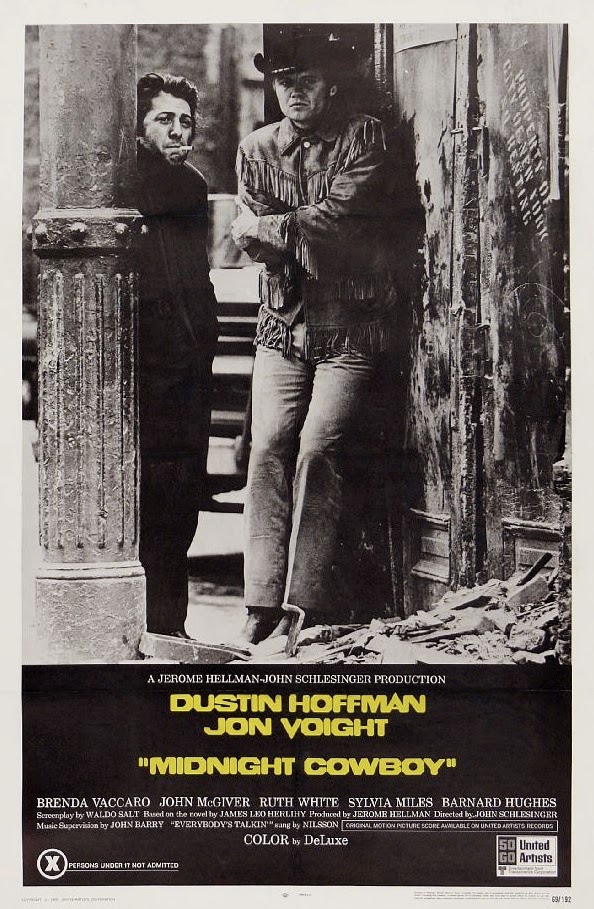 What a difference a year makes. After handing out its top accolade to Oliver, the first G-rated film to receive the distinction, the award swung to the opposite end of the ratings spectrum, landing in the hands of Midnight Cowboy, the first, and only, X-rated film to win Best Picture. (It has since been downgraded to an R rating, by the way). I guess chalk up this complete reversal of tastes to the fact that it was the swinging sixties baby and things had a way of turning on a dime.

Up front, I have to say, I wasn’t over the moon for Midnight Cowboy. It has some undeniable charisma; a louche style, giving it a certain type of depressing appeal. But by the time the credits rolled, I felt like I had watched a talented athlete only just near the mark of their potential. Actually, it felt more like watching a talented athlete inexplicably sabotage their own talent just enough for them to stumble and not elevate to something more exceptional. Midnight Cowboy is that athlete. It’s good, to anyone paying close attention, but it’s obvious there is something better inside that never manages to break free; that’s being held back. I can’t quite put my finger on what that something better is, exactly. If I had to attempt to articulate it, I would say that Midnight Cowboy is slightly episodic; it falls in and out of these sleazy situations, which never quite stitch together. They’re distractions. As a result, the film meanders away from what should have been developed: the tragic friendship between Joe Buck and Ratso Rizzo. Their failures, their loneliness, their pain gives the film its emotional muscle. Unfortunately for the viewer, it isn’t exercised enough.

Directed by John Schlesinger, Midnight Cowboy stars Jon Voight and Dustin Hoffman, who were still writing the early chapters of their careers upon the film’s release. Overall, the film lassoed seven nominations, eventually roping in three wins, including the Oscar steer for Best Picture. Schlesinger also took home the golden guy for Best Director, the zenith of a resume home to an eclectic list of films, which unfortunately included the Madonna crapfest The Next Best Thing. Apart from acting nods for both Voight and Hoffman, Sylvia Miles also snagged a nod as an aging call girl for one of the shortest performances ever to be recognized, clocking in at around five minutes. And about three of those minutes of her performance are spent changing channels on a television set with her backside. Inexplicably, the film’s theme song “Everybody’s Talkin’” apparently didn’t live up to Academy standards, as it was passed over in the nomination leg of the race, despite the fact that it went on to win a Grammy award, when winning a Grammy award actually mattered. As mentioned earlier, Midnight Cowboy’s biggest trivia claim to fame is that it became the first and only X-rated film to garner the Academy’s top honor, making it also likely to be the last film ever to do so, as the X-rating no longer exists. 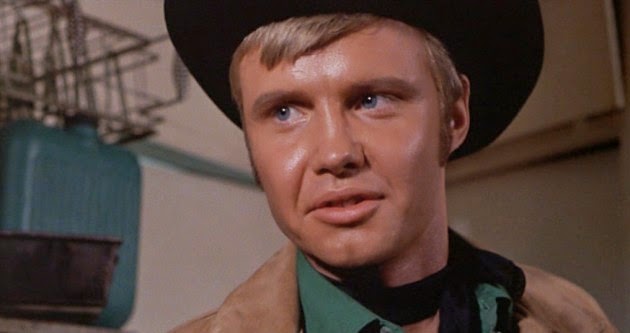 Midnight Cowboy follows the ambitions of Joe Buck, a small-town Texas dishwasher with dreams of striking it rich in the Big Apple as a hayseed hustler, wooing rich, older women into keeping him. With more wide-eyed naiveté in his countenance than Pinocchio, Joe dresses up in cowboy shtick and buys a one-way ticket east. New York quickly exposes Joe’s lack of street smarts, rapidly draining his pockets and spitting him out on the streets with only his cowboy hat and fringe suede jacket. He eventually finds refuge in a condemned building with Enrico Salvatore “Ratso” Rizzo, a seedy, crippled conman who had previously hustled Joe out of 20 clams. 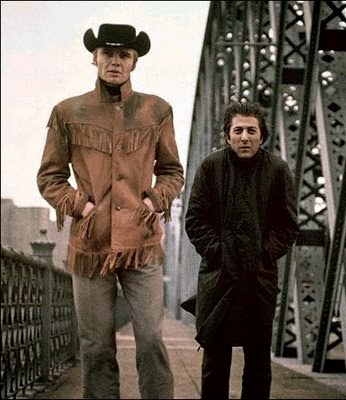 After resolving their differences, the two form an unlikely bond, slightly reminiscent of George and Lennie in Of Mice and Men, only somewhat in reverse with the larger, goofier Joe taking care of the more streetwise Ratso. The two stumble through a random series of encounters, including a trippy Warhol-esque party, which ultimately leads them nowhere financially. As Ratso’s health begins to rapidly deteriorate in the cold, New York winter, he begs Joe to take him to Florida to fulfill his conman fantasies of working over the population of bored retirees with nothing but disposable cash. In a desperate attempt to raise the funds to finance the journey south, Joe picks up an older man from a gay bar, robbing him of his cash to finance the purchase of two bus tickets. En route to the Sunshine state, Ratso succumbs to his frailties and dies an insignificant death in the arms of Joe.

Both Voight and Hoffman are crisp in the leading roles. Their physical disparities cut such an iconic image as they stroll about the dirty streets of New York side by side. Their slumped silhouettes visualize the effects that take hold of men when luck has been a stranger for too long. The friendship that is borne out of their loneliness and desperation feels unexpected, but natural, which I think speaks to the wonderful chemistry that Voight and Hoffman were able to find with each other. In fact, I would lay the majority of the credit for the film’s success at their feet. Their performances made the material far better than it existed on paper, which really heightened this sense that much of the film’s potential remained caged. 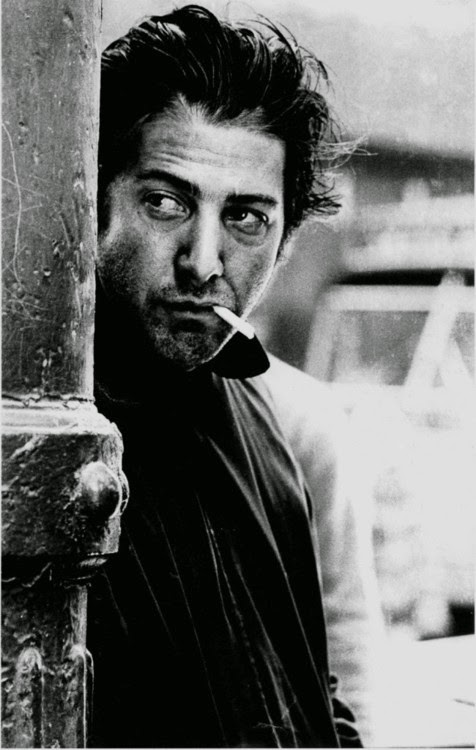 I say this because Voight and Hoffman created this complex and tragically fascinating friendship; a pairing which felt like it resided outside of the hourglass, as though it existed on some timeless, classic plane. Yet the film continually lowers them in and out of these random, time-sensitive situations, like the swinging Warhol party, that anchor the story down in its era. Instead of seeming like an enduring portrait of damaged souls struggling to achieve urban survival, it feels mostly like a cultural snapshot of two guys coping with the hard knocks of New York City. For some shortsighted reason, the story keeps veering off into this territory where the dramatic air is much thinner. But almost by some sheer force of resistance, the magnetic performances of Hoffman and Voight attempt to overpower this mistake, and steer the film’s focus away from the distractions of 1960s New York. But unfortunately, the consequence of this push and pull is that the film feels like an uneven experience.

Where this back and forth is most glaringly felt is during a series of short flashbacks of Joe’s childhood. We learn that as a tyke, Joe’s grandmother raised him after his mother abandoned him. However, his grandmother’s vibrant sexuality attaches these flashback scenes with all kinds of open-ended interpretations that would have no doubt delighted Freud. But instead of being compelling or useful by way of character development, they come off as expository noise. The irony is that they don’t even feel necessary to understanding the character of Joe Buck. In a way, Jon Voight’s face has a way of communicating volumes about Joe that none of these flashback scenes were capable of achieving. I think therein lies the main problem with Midnight Cowboy: The story needed to be told with a greater sense of simplicity, instead of adding various soap opera elements that feel like a shorthanded attempt to make it a more “serious” project. I think a little more faith in its characters and a better understanding of the story would have unleashed the film’s inner masterpiece out. 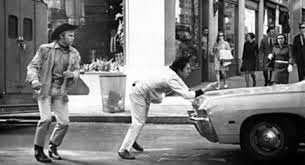 Favorite Line: Of course the best line from Midnight Cowboy is the iconic line shouted by Dustin Hoffman when Joe and Ratso and crossing the street, with the latter almost meeting the front end of a taxi cab that comes to a screeching halt. In response, Ratso slams his hand down on the hood, shouting, “I’m walking here! I’m walking here!”
Posted by Unknown at 1:36 PM No comments: