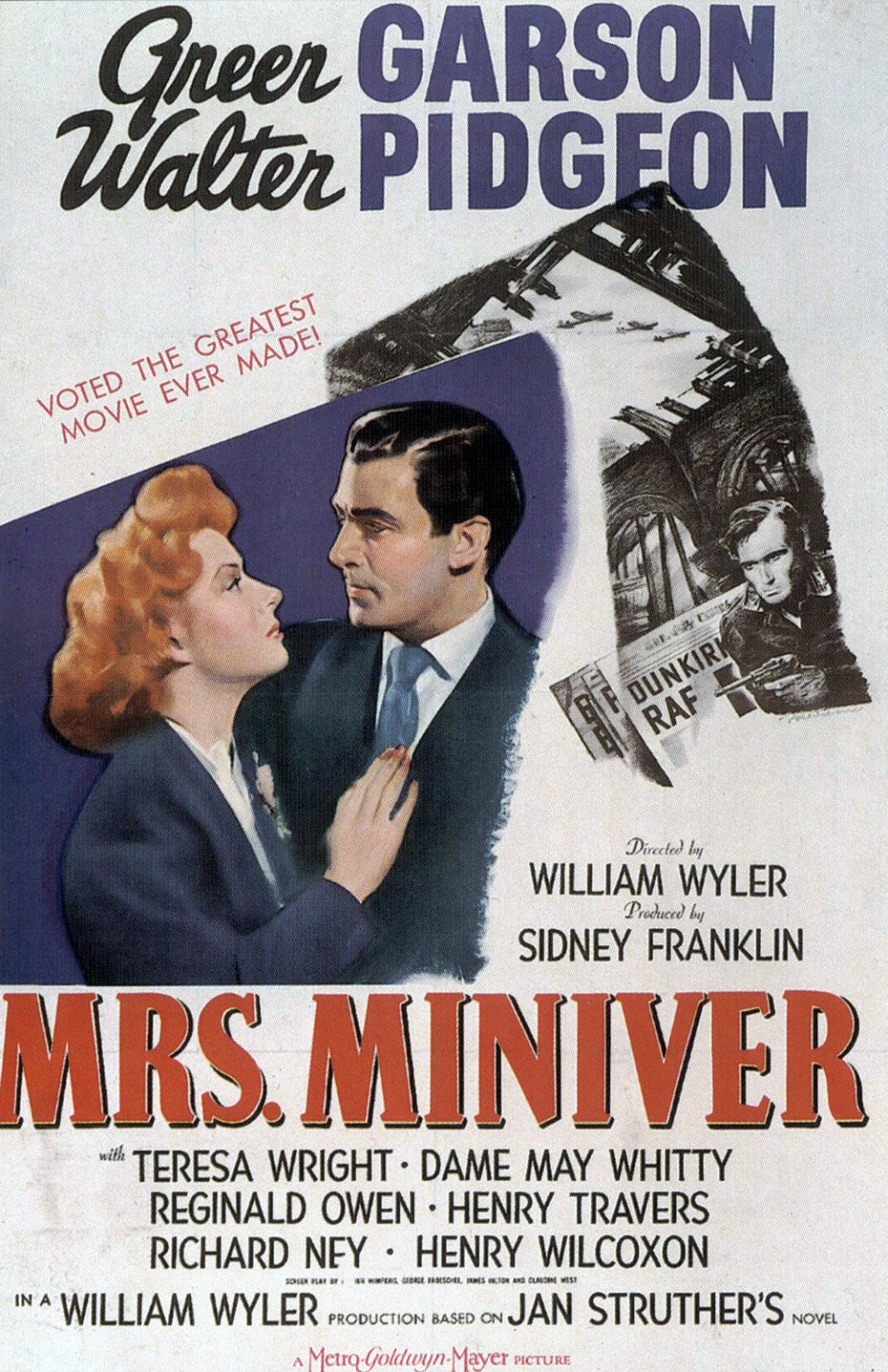 In consideration of what to say about this week’s film, my initial reaction is pledged to indifference. As far as films go, “Mrs. Miniver” is a fine entry. I would even say I enjoyed watching it. But I wouldn’t say I loved it, nor would I venture into the vicinity of saying anything close to it. When the final credits rolled, I found that nothing about “Mrs. Miniver” struck me as particularly interesting or even compelling. For the most part, the film felt forgettable and had faded from my mind by the end of the evening. As far as cinematic experiences are concerned, I think having an apathetic response to a film is perhaps the worst kind. At least a terrible film can elicit a clear and concentrated reaction that generates something to be said around the dinner table.

Directed by the legendary William Wyler, “Mrs. Miniver” garnered 12 Oscar nominations, carting off half that number, including Best Picture for 1943. The picture stars Greer Garson and Walter Pidgeon, as a middle-class English couple living an idyllic life in a small village just beyond London. The announcement of Britain’s entry into World War II quickly props up a new backdrop against which the Minivers encounter a host of distressing scenarios from assisting with the evacuation of Dunkirk to the death of their new daughter-in-law. Yet through it all, the Minivers remain steadfast and stalwart, refusing to let war force them into renouncing their courage and love for fear and bitterness.

I think one explanation accounting for why I found “Mrs. Miniver” to be principally forgettable is that none of the characters stand out as remarkable, which is disappointing as I’m a fan of both Greer Garson and Walter Pidgeon. There is no character development throughout the course of the story. All of the principle players are nice, good-natured and sweet to each other. Everyone seemingly maintains all of the same qualities intact by the end of the film that were present at the beginning of the film, without any alterations, despite having endured all that they did. I refuse to accept that an individual’s character wouldn’t undergo some sort of revision with the precarious spirit of World War II literally making its way to their front porch.

But the central characters in “Mrs. Miniver” seemingly all do surmount the odds, avoiding any dramatic changes. As a viewer, it becomes difficult to root for the people on screen and make a connection with them when they are coated in narrative Pam where nothing emotional can stick. After a while, for me the effect was that I divested myself of the Miniver’s journey altogether. Given that there was no measurable change or impact on their lives, I knew the film was not going to place the Minivers in any real danger that would test their mettle. Even the death of Carol, their daughter-in-law, felt like it had minimal impact because they all had this unrealistic way of accepting this grim tragedy without expressing any emotional defiance.

The only snaps I can really think to submit on this film’s behalf is that it adds a different angle to the canon of war films by offering up a portrait of civilian life. Unlike the majority of war films, “Mrs. Miniver” doesn’t transport the viewer to the front lines of battle. Instead, it maintains a domestic perspective, attempting to showcase the effects of the battlefield, as it rattles everyday living. Suddenly material possessions like cars and lady’s hats fade in value, as the Minivers are confronted by the perils of war, causing them to strip away superficial priorities. But here again, the film never dives to any great depth to illustrate the struggle of readjusting civilian reality to the more aggressive existence of war. I suppose this problem can be traced back to the issue of the characters not being presented in a complex or dimensional way.

As I mentioned earlier, I typically enjoy Greer Garson, as an actress. (Side note: Her first name is a contraction of her mother’s maiden name MacGregor.) She exudes a mannered and calm beauty in her roles, like staring at a big bouquet of freshly cut flowers. During the height of her career, she was nominated for an Academy Award for five consecutive years, a record equaled only by Bette Davis. “Mrs. Miniver” proved to be the only occasion on which she would win the Oscar statuette, and she took full advantage of the situation, delivering an acceptance speech that apparently groaned on for seven minutes, the longest in Oscar history. There is no denying that she is solid in “Mrs. Miniver.” However, I think it owes more to her likeability as an actress than being an interesting creation by Garson, sort of like Sandra Bullock in “The Blind Side.”

In truth, “Mrs. Miniver” works more as a piece of propaganda than as a piece of entertainment. Propaganda is a form of communication that seeks to influence opinion, doing away with impartiality and letting the audience decide. When impartiality is eliminated, it anchors the narrative to remain in more simplistic waters. That essentially sums up “Mrs. Miniver,” which sought to be a ray of hope that would elicit sympathy and support for the struggle of the ordinary, everyday British citizen against the onslaught of Nazi attacks. From that perspective, the film plays on a much more interesting note. Of its effectiveness, Winston Churchill is said to have remarked that “Mrs. Miniver” is “propaganda worth 100 battleships.” Taken in that context, it’s no wonder that it was a box office behemoth of the 1940s that affected the attitudes of millions. But like all propaganda, “Mrs. Miniver” was created to exist for a specific cause now passed, making it feel dated and somewhat difficult to appreciate its power because the times are remarkably different now. 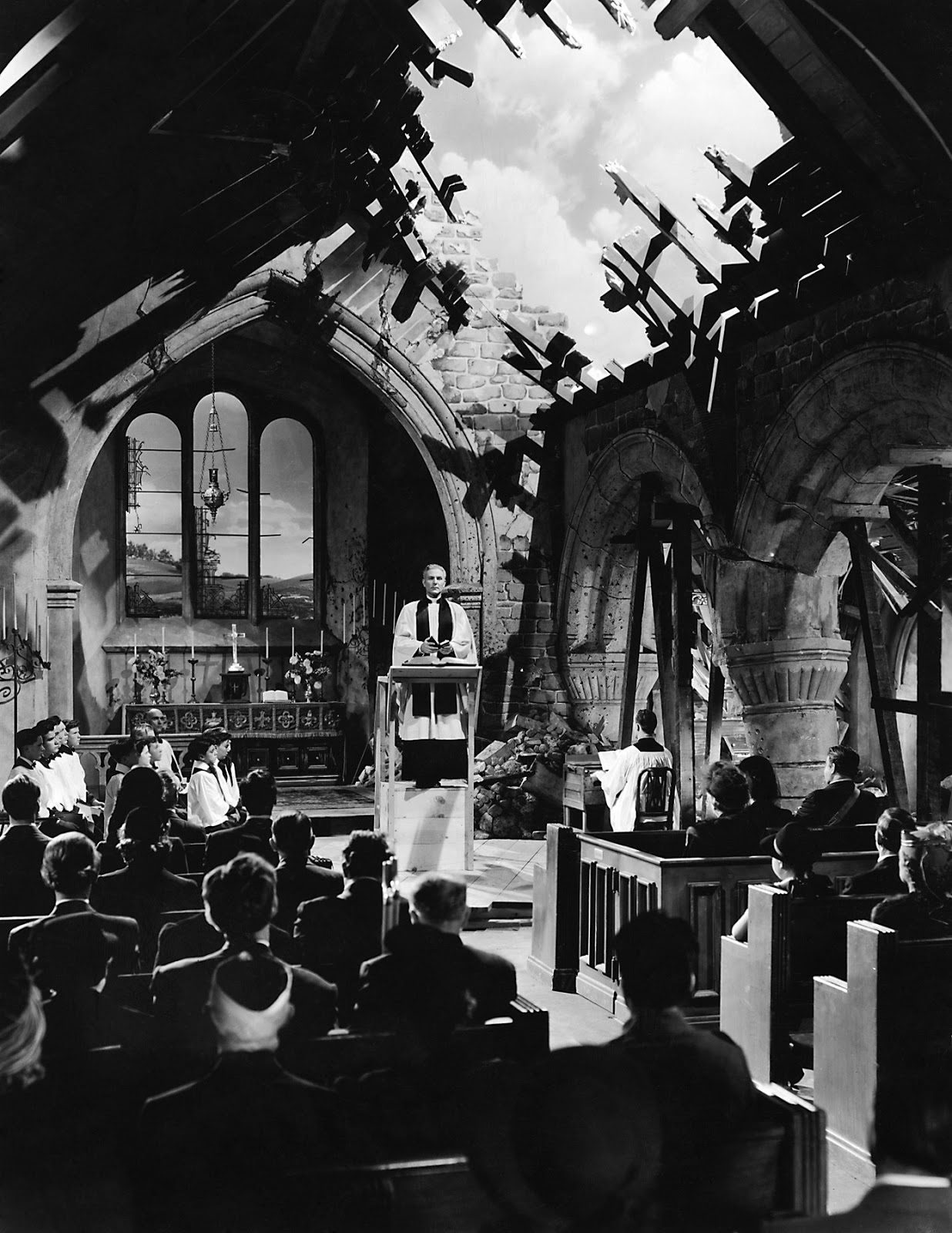 Favorite Line: The finale of “Mrs. Miniver” is staged in the local church, now ravaged and fragmented by war, where the local vicar makes an impassioned speech to his small parish, imploring them to take up the cause to fight for freedom against those that would impose tyranny. Apparently, this speech made such an impact the President Franklin Roosevelt requested the text to be broadcast over the Voice of America in Europe and to be printed on millions of leaflets dropped over German-occupied territory. It has often been cited as an example of the type of Hollywood filmmaking that helped mobilized America to war in defense of its allies. The text of the speech is printed below:

We, in this quiet corner of England, have suffered the loss of friends very dear to us-- some close to this church: George West, choir boy; James Bellard, station master and bell ringer and a proud winner, only one hour before his death, of the Belding Cup for his beautiful Miniver rose; and our hearts go out in sympathy to the two families who share the cruel loss of a young girl who was married at this altar only two weeks ago.

The homes of many of us have been destroyed, and the lives of young and old have been taken. There is scarcely a household that hasn't been struck to the heart.

And why? Surely you must have asked yourself this question. Why in all conscience should these be the ones to suffer? Children, old people, a young girl at the height of her loveliness. Why these? Are these our soldiers? Are these our fighters? Why should they be sacrificed?

I shall tell you why.

Because this is not only a war of soldiers in uniform. It is a war of the people, of all the people, and it must be fought not only on the battlefield, but in the cities and in the villages, in the factories and on the farms, in the home, and in the heart of every man, woman, and child who loves freedom!

Well, we have buried our dead, but we shall not forget them. Instead they will inspire us with an unbreakable determination to free ourselves and those who come after us from the tyranny and terror that threaten to strike us down. This is the people's war! It is our war! We are the fighters! Fight it then! Fight it with all that is in us, and may God defend the right.
Posted by Unknown at 4:54 PM