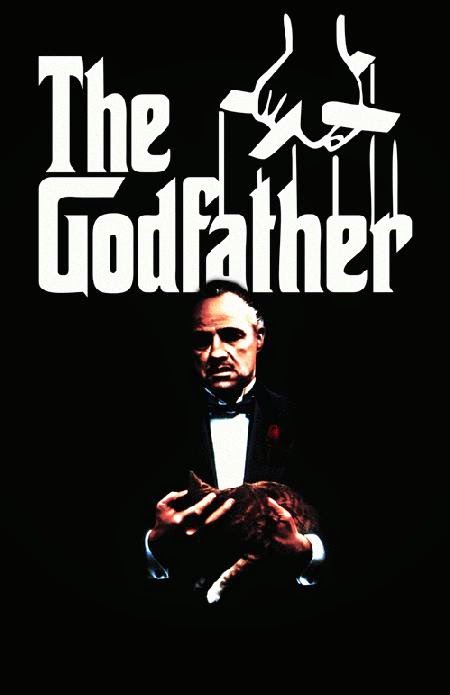 Every guys loves The Godfather. It’s the ultimate dude movie. It’s our rebuttal to the chick flick. It’s our Beaches. It’s our Steel Magnolias. It’s our Pride and Prejudice. The movie review aggregator site Rotten Tomatoes does a recurring feature where they ask actors and filmmakers to list their five favorite films. And literally every guy that participates in this Rotten Tomatoes feature includes The Godfather on their list. But the thing is, these dudes don’t just salt and pepper a bit of praise on The Godfather, they go wild for it like Augustus Gloop in the chocolate room. It’s their cinematic idol that they all worship. In the film You’ve Got Mail Tom Hanks tells Meg Ryan “the Godfather is the sum of all wisdom. The Godfather is the answer to any question. What should I pack for my summer vacation? ‘Leave the gun, take the cannoli.’” And that about sums it up right there, thanks Tommy.

Just as it’s no understatement to say The Godfather is on every guy’s list of favorite films, The Godfather is also the rare film that indisputably defines a cinematic genre. It’s really is a landmark in the cinematic firmament because before 1972 there was no film like it. But since 1972 there have been waves of films that have borrowed themes, motifs, mood and whatever else from The Godfather. The genealogy of every mafia and gangster film has the DNA of The Godfather coursing through its celluloid veins. Even cinema’s little brother television has found itself serving up shows that invariably tip their hat to The Godfather. There would be no Sopranos without the Corleones.

Directed by Francis Ford Coppola, The Godfather pretty much became a turned key in the ignition of the careers of all those who starred in it: Al Pacino, James Caan, Robert Duvall and Diane Keaton. As for Marlon Brando, it’s difficult to quantify how much the role of Vito revived his stalling career. But at the very least it represented a grand-slam comeback for him. So much so that I almost don’t even remember that he starred in The Island of Dr. Moreau (I said almost). 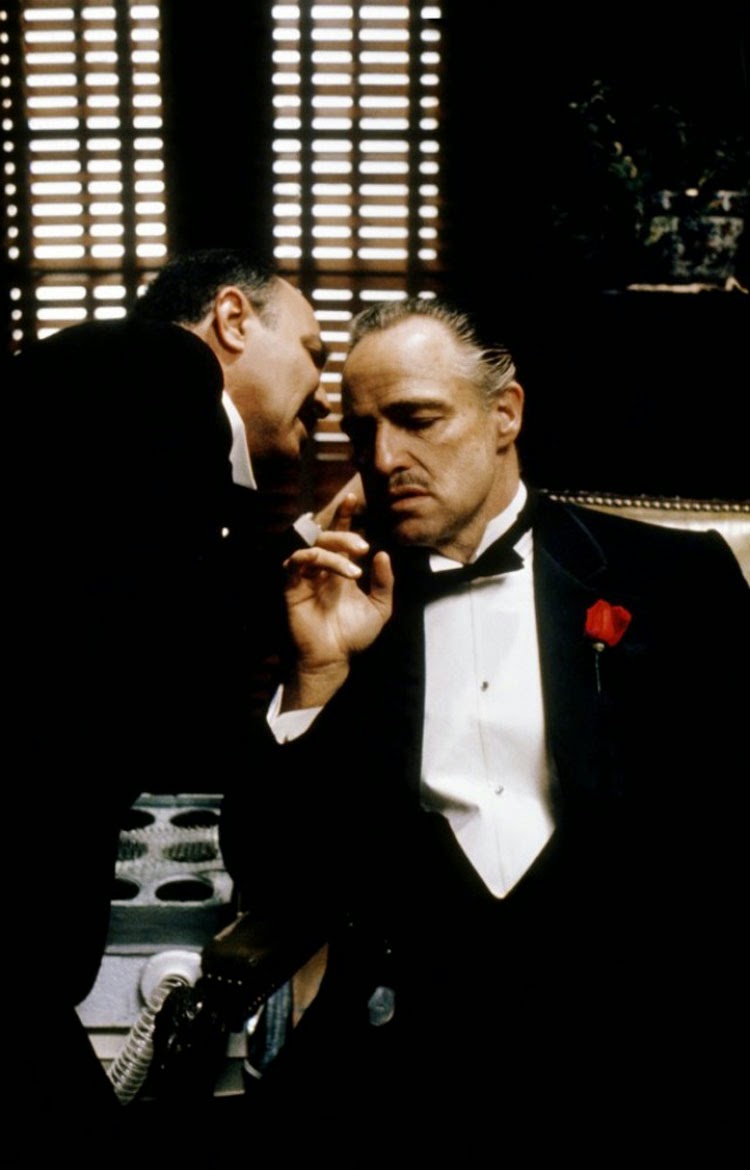 The Godfather received a gargantuan hall of 11 Oscar nominations. Given the legendary status this film has accrued since its release, it’s kind of startling to know that it ended up making an offer that only three golden boys couldn’t refuse. Although it did nab the big prize for Best Picture in 1972, three total statuettes somehow seems paltry for a film of The Godfather’s magnitude and quality. To be fair, I should point out that Pacino, Caan and Duvall were all lumped into the Best Supporting Actor category, meaning they pretty much cannibalized each other’s chances of emerging victorious. But over the years, other aspects of the film, from its score to its edgy-for-its-time cinematography, have generated a lot of discussion and analysis, not to mention the copious amounts of ink lauding their artistry. So it’s puzzling to me that The Godfather didn’t scoop up more Oscars in the below-the-line categories.

In terms of Oscar trivia, Brando’s win for Best Actor heightened the actor’s decision to boycott the ceremony and his refusal to collect his trophy. His absence created an even bigger stir when he sent Native American rights activist Sacheen Littlefeather to the podium in his stead, where she proceeded to explain Brando’s refusal of the Oscar stemmed from his objections to the way Native Americans had been portrayed in film and on television. Littlefeather’s speech was met largely with applause, punctuated by some boos, making it a distinguished moment in Oscar history. 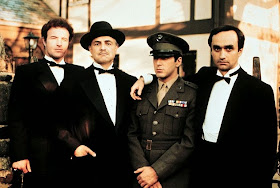 In addition to Brando, Pacino also stayed in his jammies the night of the Oscars, apparently pissed off that he was demoted from the Best Actor category in favor of Brando because Pacino had more screen time. I get that argument, but boo freaking hoo Pacino. Don’t be such a divo. The reality is that screen time has never been and shouldn’t be the only guideline by which someone is considered a leading actor or supporting actor. The fact is that The Godfather is an ensemble piece. So yeah, Vito disappears for long swaths of the film’s running time, but so does Michael. However, timing debates aside, the plain reality of the situation is that Brando had a more memorable role and he crushed it like a bawwwwss. Not to diminish Pacino’s work, but Brando’s performance has truly attained iconic status. Whenever anyone hears the title The Godfather, they instantly picture Brando’s Vito sitting in his dark, wood-paneled office contemplating, slightly brushing his puffed out cheeks with the back of his fingers; or else they hear Vito say, in his raspy voice, “I’m gonna make him an offer he can’t refuse.” So sorry Pacino, but boycotting the Oscars is total sour grapes buddy. Be a team player and have respect for the fact that your costar blew you and the rest of the film’s cast right out of the water, which, when considering how amazing the performances were, is nothing to hang your head in shame over.

Anyway, at this point in the post is where I typically proceed to recap the film’s plot. But if you’re not already familiar with at least the basic story of The Godfather, I’m certainly not going to recap it for you hear. Simply put, you need to elevate the level of your cultural literacy. It’s one of the most famous films of all time, and if you don’t know the plot, then get your act together and go see it. Whatever “priorities” you have going on in your life can wait, capiche?! 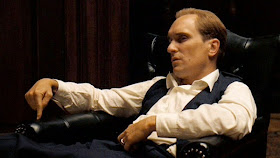 Like I said earlier, The Godfather is an ensemble film filled with a police lineup of standout performances. For anyone who loves cinema, few things are more satisfying than watching a film where everyone from the main characters to the shoe-shiner level roles with one line all deliver the goods. It’s one thing all the truly great films have in common. Of course Brando is spectacular, while Pacino and Cann are terrific in every sense of the word. But in watching The Godfather this time around, I was struck by a new appreciation for Duvall’s performance as the family attorney Tom Hagan. It’s definitely a more subtle and quiet performance, especially side by side with Caan’s explosive Sonny Corleone. But Duvall illustrates a hushed strength through Tom’s loyalty and gratitude to Vito, making him a compelling character. It’s Tom’s calm demeanor and ability to eschew boiling over that makes watching Duvall no less than thrilling to watch because you get a sense that lurking beneath the surface is a checked intensity capable of anything. This creates an interesting type of suspense because as the action takes a new turn and the world for the Corleones changes you find yourself wondering how Tom is going to react. Perhaps the best example of this is Tom’s visit with a naïve Hollywood producer, who hotly and abrasively turns away Vito’s request to cast his godson in the part of a film. To lean on him a little, Tom gets creative and tucks the producer into his satin bed with the severed head of his prized stallion. Classic.

There is one complaint about The Godfather that I’m gonna raise. It’s a small, nitpicky issue, but I’m still going to address it: Did they have to make Diane Keaton look so awful? I’m a big fan of DK, and I think she owns a certain beauty that is unique among Hollywood starlets. But the hair and makeup departments seemed completely hell bent on submerging her into underneath the sickest looking wigs and nastiest makeup the 1970s had to offer. From head to toe she looks like something the cat dragged in, took one long look at and dragged back out from sheer disgust. I know I’m starting to sound like Joan Rivers and the fashion police, but I really couldn’t get passed how wrong Keaton looked all throughout the film. Everyone else looked stylishly appropriate, which made Keaton’s look seem all the more neglected. Fortunately she is a talented actress who still managed to emerge from the experience with a great performance. But seriously someone from the wig shop should have been wacked for botching this deal.

Favorite Line: I gotta go with “I’m gonna make him an offer he can’t refuse.” I mean that’s it. There’s nothing more to say. Ciao.
Unknown at 6:47 AM
Share