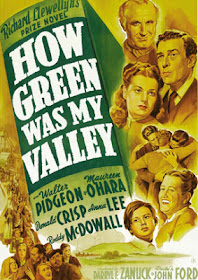 Before even watching “How Green was My Valley,” I had already dismissed this film. It was clearly a nauseatingly saccharine melodrama, a judgment that subsequently caused me to let it sit on my bookcase in its red Netflix envelope for well over a week. In that time, for some inexplicable reason, I really began to dislike this film, which made me resist wanting to even watch it at all. Every time I walked by my bookcase, the inclination against watching it twisted and congealed. So by the time I finally put the DVD into the player, I was convinced that I was thoroughly going to dislike this film, probably even hate it.

However, “How Green was My Valley” completely took me by surprise. It was still a sentimental story with several overly acted moments. But it owned every tender ounce of its sentimentalism, always remaining wholly committed to being genuine and sincere. Despite my walled up determination toward disliking this film, it managed to deliver a knock-out punch, leaving me to reflect on it days after watching it. And just for the record, yes, it did make me tear up a little bit at the end, but so what. I challenge anyone to watch this film without feeling a lump climb up their throat. If that doesn’t happen, you may just be the world’s only living heart donor.

Directed by the formidable John Ford, “How Green was My Valley” was nominated for 10 Academy Awards in 1941, taking home five prizes, including Best Picture. The film stars Walter Pidgeon, Maureen O’Hara and, making his first significant screen appearance, “Master” Roddy McDowall, so he was billed. Apparently, McDowall was one of thousands of children evacuated to America during WWII. Shortly after his arrival to The New World, he screen tested for the part of young Huw Morgan, and the rest is, as they say, history.

The film begins with an older Huw Morgan making preparations to leave behind his valley, which has been blackened by pollution and slag from the surrounding coal mines. As he begins gathering his few belongings, Huw recounts the memories of his youth in the small Welsh coal-mining village where he lived with his family. The Morgans endure a hard life, but they, along with the rest of their community, live with a sense of pride and dignity. They are humble and plain, with a reverence for God ever dwelling in their hearts.

Given their dependence on the coal mine, the Morgan’s way of life hangs in a delicate balance. The first sign of trouble looms when the worker’s wages take a cut. This singular action touches off a chain of events, besetting poverty, injustice and death upon the Morgan’s front step. These greater forces eventually cleave the Morgan family into parts, remaining committed to one another only through their memories and familial bonds forged of God.

There are a lot of standout elements in this film from the music and cinematography, particularly Roddy McDowall, to the performances and directing. But for me, what made this film so prevailing is that the narrative taps into a universal longing for those pleasant childhood memories created when one is young; unspoiled from the knowledge rooted in the unsettling certainties of life. The memories created in that time are revisited again and again because they are pure, idyllic and hopeful, preserved from corruption brought on by later disappointments and trials. In a way, this film is about the older Huw Morgan seeking to reclaim the memories of his youth to when life seemed green and vibrant, untouched from the slag of harsh realities.

This frame of mind, this personal sense of reference, lends a heightened sense of sorrow to watching the chapters of Huw Morgan’s childhood unfold against the shifting backdrop of the coal mines. Despite his stalwart and loyal nature, the cruelties of life deliver blow after blow to Huw. The building sense is that with each knock, Huw is being pushed further and further away from innocence, as he begins to understand firsthand the harsh realities of being. By the end of the film, when Hugh is pulled from the wreckage of the coal mines, cradling his departed father’s head in his arms, it feels like his final farewell to childhood. It’s absolutely heartbreaking.

“How Green was My Valley” became the highest grossing film the year it was released. However, in retrospect it became a miracle the film ever ended up going into production at all. Its producer, Darryl F. Zanuck, originally conceived of the project as a colorful, four-hour epic on footing with “Gone with the Wind.” The producer’s wanted to shoot on location, but their plan was thwarted when Hitler declared South Wales to be a target of his forces. An additional dent was put into Zanuck’s vision by the suits at Fox who made the decision to reject the picture because of its pro-labor theme, lack of star power and large budget.

Zanuck eventually swapped Malibu for South Wales, which meant shooting in black and white in order to give the brown and sage colored hills of California appear lush and green. Not using color proved a blessing in disguise as it captured the grit and grim of life in the coal mines, that color might have overlooked in its vibrancy. The original director, William Wyler, was also swapped out for John Ford, who is credited with infusing the film with an abundance of heart, despite his prickly professional nature. In a documentary recalling the making of “How Green was My Valley,” Maureen O’Hara affectionately recalled working with Ford, saying, “We used to call him the meanest old S.O.B. there ever was. But he was our S.O.B., and we adored him.” 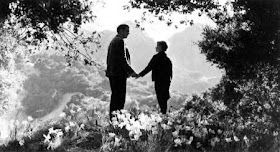 “How Green was My Valley” is often criticized for taking home the top trophy on Oscar night over the more celebrated “Citizen Kane.” While there is no denying that “Citizen Kane” is a classic, I believe its triumph’s lay more in its technical achievements that were and continue to be ground-breaking and influential. However, these accomplishments appeal to the mind, whereas “How Green was My Valley” stirs the heart, making it much more potent to anyone willing to experience it.

Favorite Line: In the film’s final scene, young Huw Morgan bravely searches the teetering debris of the coal mines, following an accidental explosion. After finally finding his father crushed beneath the ruins, young Huw is pulled from the dark pit of the mines, holding his father’s crumpled body, as the voice over belonging to the older Huw says, “Men like my father cannot die. They are with me still, real in memory as they were in flesh, loving and beloved forever. How green was my valley then?!”
Unknown at 6:18 PM
Share