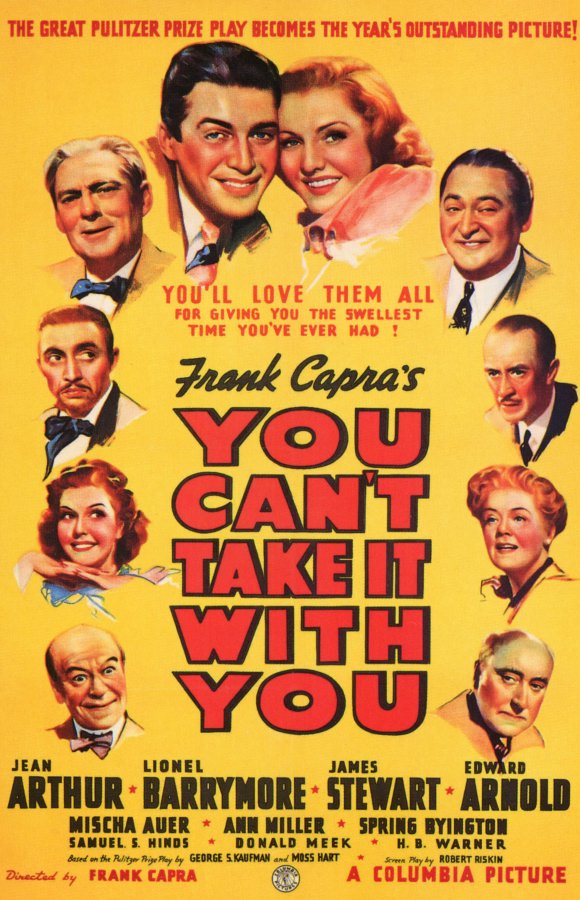 When it comes to the films that have won Best Picture, the 1930s is a dichotomous decade. The films that took home the top prize seem to be either cinematic works of wonder or disappointing duds. Scaling the zenith are films like “All Quiet on the Western Front,” “Mutiny on the Bounty” and “Gone with the Wind.” However, lurking at the base are films like “Grand Hotel” and “The Great Ziegfeld.” Unfortunately for this week’s post, “You Can’t Take It withYou” is keeping company with the latter films.

Helmed by the great Frank Capra, “You Can’t Take It with You” racked up seven Academy Award nominations, taking home the prizes for Best Director and Best Picture in 1938. Based on the Pulitzer Prize-winning play of the same name, “You Can’t Take It with You” concerns a pair of young love birds played by Jimmy Stewart and Jean Arthur at their aw-shucks darndest. Unfortunately, they’re from different sides of the tracks, causing Stewart’s banking tycoon father and his snobbish mother to entirely disapprove of the match. To make matters more complicated, Arthur’s eccentric family resides on a piece of real estate smack dab in the middle of the way of a munitions monopoly scheme overseen by Stewart’s father.

In many ways, this is a completely classic Capra film where the intangible forces of love and family reign triumphant over the wealthy and unfeeling forces of society. It’s a formula that played out to perfection in other Capra films like “It Happened One Night” and “It’s a Wonderful Life.” And even though “You Can’t Take It with You” follows the same recipe, what comes out of the oven is not even close to being in the same league as Capra’s other efforts.

One reason accounting for the funny taste is that Jimmy Stewart and Jean Arthur have thin chemistry between them. Their controversial romance is really the beating heart of the story, setting all other events into motion. However, their characters are dull and don’t pull you in to root for their love to succeed in the face of such great odds. Unfortunately, dull and indifference can’t sustain the heavy lifting of any narrative and “You Can’t Take It with You” is no exception.

It’s interesting that Stewart and Arthur failed to be an interesting onscreen couple in “You Can’t Take It with You,” when the very next year they hit a home run as a complex and compelling couple braiding together complex emotions of naiveté and cynicism in “Mr. Smith Goes to Washington,” another Capra classic. I think the fact that Stewart and Arthur landed with a thud in “You Can’t Take It with You” is a reflection of the material not having aged well.

Reinforcing this notion even further is the fact that the film was apparently the highest grossing film the year it was released. Obviously it connected with the audience of its time. In some ways it’s a film that is the perfect antidote to the woes of the Great Depression. After all, it showcases an evil banking tycoon succumbing to the powers of love and family, forces seemingly more relatable to the struggling classes. I would imagine that for the movie-going public of the late 1930s, this message resonated hope and optimism about the world around them.

However, this hope and optimism resulting from the film’s perfectly packaged denouement are why I ultimately didn’t care for this movie. It’s not that I’m some scrooge who can’t appreciate a predictably happy ending. I’m a big fan of films like “It’s a Wonderful Life” and “The Miracle on 34th Street.” But where those sentimental films differ is that “You Can’t Take It with You” has an overly saccharine ending that leaves you drowning in sentimentality, making it impossible not to roll your eyes at it all. I think this type of aversion is maybe a commentary on modern-day thinking to shun too much sentimentalism in favor of honest, gritty reality, particularly when it comes to a character’s evolution.

This made me think of a film I watched recently starring Denzel Washington called “Flight.” The story is a character study of a commercial pilot who is perceived to be a hero, professionally speaking. However, his personal life is teetering off the rails, due to drug and alcohol abuse. But he has somehow managed to keep his professional and personal lives running on parallel tracks, until they collide and, literally and figuratively, crash land in a way that eventually alters his character. Washington gives an unvarnished performance and spends most of the film resisting change, making the experience of watching “Flight” heartbreaking and frustrating, in a good way. But when the denouement results in Washington’s character deciding to chart a different course for his life, it’s believable and organic. His character doesn’t turn on a dime and suddenly everything is sunshine and roses, which is essentially what I thought happened before the final credits roll in “You Can’t Take It with You," particularly with the main film's main villain.

In the end, I wish they had taken it with them because “You Can’t It with You” is a major disappointment, particularly given the film’s pedigree. I’ve enjoyed so many of Capra’s other films, and I’ve always thought Jimmy Stewart was one of the greatest actors, which makes witnessing this collaborative dud that much more of a letdown. Fortunately, I can always go back and watch “It’s Wonderful Life” to restore my faith.

Favorite Line: Truthfully, there weren’t any lines in this film that I would tag as standing out to me. So I decided not to include one as being a favorite. Better luck next time.
Unknown at 3:33 PM
Share